What does CMR mean?

The CMR Convention (full title Convention on the Contract for the International Carriage of Goods by Road) is a United Nations convention that was signed in Geneva on 19 May 1956. It relates to various legal issues concerning transportation of cargo by road. It has been ratified by the majority of European states.[1] As of February 2017, it has been ratified by 44 states.
The CMR consignment note, also called the CMR carriage letter, regulates the carriage of goods of any kind, by trucks. It is used when loading and unloading are in different countries. At least one of these countries must be a CMR member. This is true regardless of the seat or the citizenship of the parties. The agreement is valid in all EU member states as well as in several other countries.

If a situation is not sufficiently regulated by the CMR, it is applicable in addition to national legislation.
Liability for damage caused during transport is also regulated by the CMR consignment letter.
CMR is intended exclusively for the carriage of goods by road, container and modular superstructures are not considered vehicles.

What does a CMR consignment note contain?

The data contained in the CMR consignment note are: the consignor, the consignee, the accompanying documents, the type and quantity of the goods transported, the registration number of the motor vehicle, the carrier. These data must be filled in correctly in the consignment note.

According to Article 5 and Article 6 of the Convention on the Contract for the International Transport of Goods by Road (CMR) (Geneva, May 19, 1956), completed by the 1978 Protocol According to Art. 6 :

1. The journey letter must contain the following data:
(A) the place and date of its drawing up;
(B) the name and address of the consignor;
(C) the name and address of the carrier;
(D) the place and date of receipt of the goods and the place where they are to be delivered;
(E) the name and address of the consignee;
(F) the nature of the goods and the type of packaging;
(G) the number of packages, special markings and their numbers;
(H) the gross weight or the quantity of the goods;
I) the expenses related to the transport (transport price, additional expenses, customs duties and other expenses incurred from the conclusion of the contract until the release);
J) the necessary instructions for customs formalities and others;
(K) the indication that the carriage is subject to the arrangements established by this Convention and any other contrary provision.

2. If applicable, the consignment note must also contain the following:
A) prohibiting transshipment;
B) expenses that the sender takes over;
C) the total amount of money to be paid for the release of the goods;
D) the declared value of the merchandise and the amount representing the special interest in the issue;
E) the sender’s instructions to the carrier regarding the insurance of the goods;
F) the agreed time frame in which the shipment is to be carried out;
G) the list of documents delivered to the carrier.

3. The parties may insert in the letter of carriage any other indication they consider useful.

From the practice found that a total of 3 copies of the CMR consignment note is insufficient, requiring at least one copy for companies expeditions.

To help you, we have created an online CMR document management software available for FREE! 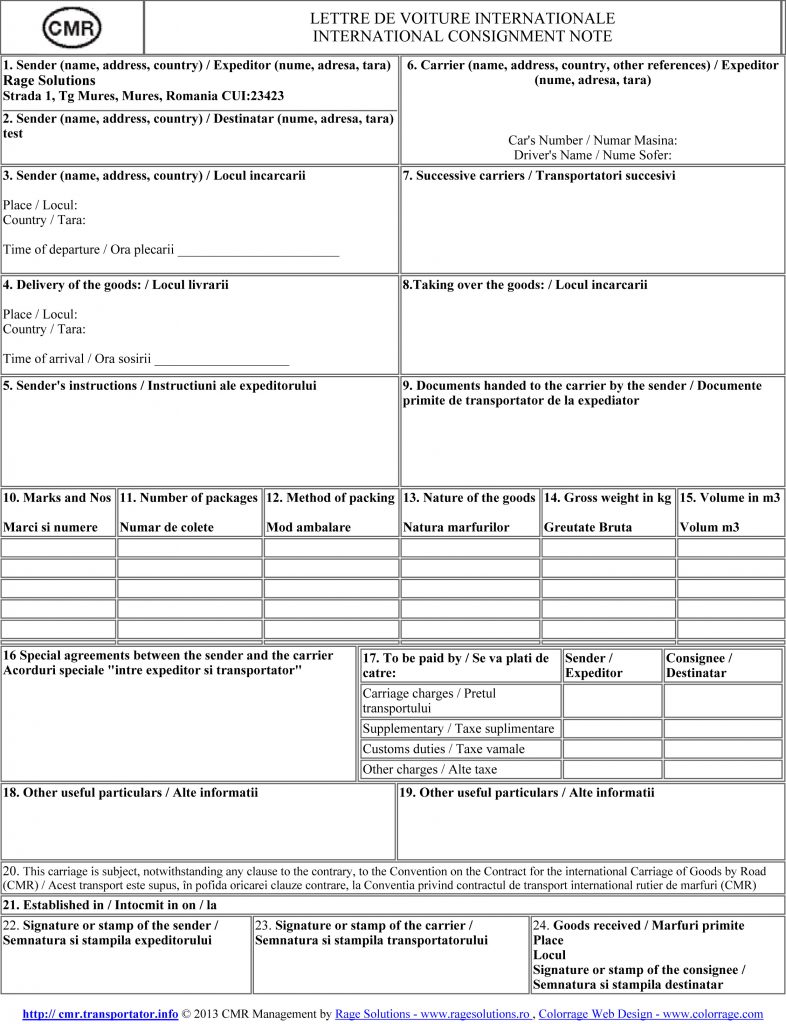 Signup for free to use
CMR Management

We use cookies to ensure that we give you the best experience on our website. If you continue to use this site we will assume that you are happy with it.OkRead more